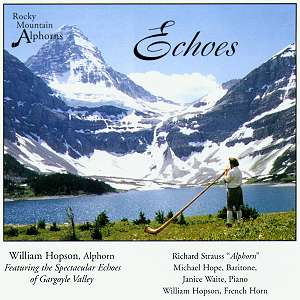 NEW WEBPAGE FEATURE: Rocky Mountain Alphorns is now offering short sound samples from selected tracks on our compact discs. Just click on a yellow, orange or green controller button below to activate one of the sound samples. You might want to turn up the volume on your computer speakers a bit, to better enjoy the warm sound of the Alphorn and the natural accoustics surrounding it. 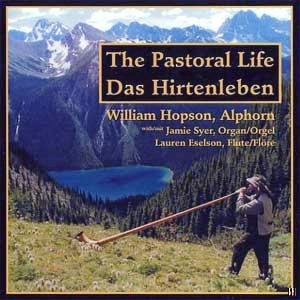 William Hopson's latest compact disc release offers the most eclectic program of Alphorn music that is curently available on any Alphorn recording. From the solemnity of the ancient folk melodies to a cool blues quartet, the emphasis is always on what the Alphorn does best; lyrical melodies with a sonorous sound. It is a beautiful production, including cover, program and informative program notes in both English and German.

The organist is Jamie Syer. He performs on two of the finest instruments that Calgary has to offer; the grand Organ in Knox United Church and the lyric Organ in Grace Presbyterian Church. In addition, for the featured trio, "Alpine Folksong Suite" (Suite Montagnarde) by Jean Daetwyler, Hopson and Syer are joined by flutist Lauren Eselson.

Of course, no Alphorn CD would be complete without a recording of the Alphorn in the great outdoors, so William Hopson has included several traditional melodies (as well as some melodies he wrote himself) recorded in the wonderful natural accoustics of Lyric Lake in the Canadian Rocky Mountains.

The CD also features a recording of the beautiful Swiss folk song "The Old One from the Muota Valley" which was recorded by William Hopson on a Büchel made in his Rocky Mountain Alphorns workshop. The Büchel is a little known wooden instrument native to Central Switzerland, which can be best described as a wooden Bugle. The sound engineer for the CD, Mark Ellestad of Hexagon Studio, recorded the Büchel in several parts of Grace Presbyterian Church and multitracked the sound. The result perfectly recreates the atmospheric sound of shepherds calling (and answering) across the valley in the traditional evening "All is Well" signal. For more information about the Büchel, see the Büchel page on this website.

For a complete change of pace, the final track is a blues quartet, "Mule Train - Blues" by Hans-Jürg Sommer, for which Hopson and Syer are joined by jazz sidemen John Hyde (String Bass) and Eric Hopson (Drum Set).

The compact disc is over 60 minutes long, and is recorded in digital stereo. This is William Hopson's best recording to date.

COVER PHOTO: William Hopson and his Rocky Mountain Alphorn at Wonder Pass on the Continental Divide. Lake Gloria is below.

The Spirit of Alphorn (Alphorn and Organ)........Hans-Jürg Sommer

The Old One from Muota Valley (Solo Büchel, multi-tracked)........R. Eichhorn 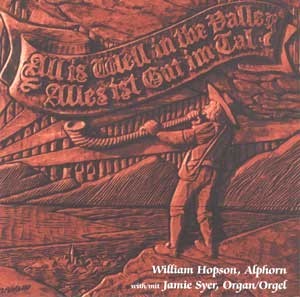 "All is Well in the Valley"

William Hopson's Alphorn artistry is showcased in a CD of music for Alphorn and Organ. It is a beautiful production, including cover, program and informative program notes in both English and German.

MUSIC: The organist is Jamie Syer on the Organ at Knox United Church in Calgary. This recording features music by composers Hans-Jürg Sommer, Carl Rütti and Charles Conord. In addition, there is solo Alphorn music recorded in the wonderful natural accoustics of Delirium Valley in the Canadian Rocky Mountains. The compact disc is over 52 minutes long, and is recorded in digital stereo.

HISTORICAL BACKGROUND: Since ancient times the Alphorn has sounded as a part of the daily activities of the shepherds and cowherds of the pastoral people who live on the north slopes of the Alps. The Alphorn was used to calm the dairy cows at milking time. It was the twilight signal for the flocks of sheep to settle in for the night as the shepherds exchanged rustic melodies across the valleys. Such melodies became ritual signals for "All is Well in the Valley" and were passed down through countless generations, from shepherd father to shepherd son.

ARTWORK: The cover of this new compact disc, an original carving by Rocky Mountain Alphorns artist Doug Pauls, features an Alphorn blower sounding such a sunset signal from a hilltop above his village. The final melody on this compact disc, which is an ancient "All is Well in the Valley" signal from the Rigi area of Switzerland, could well be the peaceful melody that he is sounding.

All is Well in the Valley (Alphorn Solo)..........Traditional Alphorn Signal

[Following is an excerpt from a review of the CD "All is Well in the Valley", written by Calvin Smith, published in The Horn Call, the quarterly magazine of the International Horn Society, May 2001.]

.....The solo, chamber, and orchestral literature for the horn draw from medieval chant, folk melodies, and many other sources to make our repertoire extremely rich and varied. The alphorn and its prominent use of Swiss folk tunes and melodies has been an important contributing part of this literature, probably the best known being the one used by Brahms in the fourth movement of his first symphony.

That folk tune, All is Well in the Valley, is heard at the close of this CD by William Hopson. Hopson has been a hornist with the Calgary Philharmonic Orchestra since 1977 and has become an important advocate of the alphorn through his performances and recordings, and as a maker of alphorns of the finest quality. His playing on this CD is beautifully expressive. Hearing his sounds reverberate through a Swiss village high in the mountains would be an impressive and stirring experience. I found this CD to be filled with lovely sounds, exceptionally expressive lines, and interesting melodies. As an example of what the alphorn sounds like and what can be played on it, this recording must be considered at the highest level........

In his first compact disc, William Hopson performs in Gargoyle Valley. Renowned for its echoes, this remote valley is the perfect setting for an Alphorn. The music reveals much about Alphorn sound and style.

This compact disc is seen by many players in Switzerland as the clearest example of Alphorn blowing in the alpine tradition. As such, it is often recommended to aspiring Alphornists for study; but it is much more than that. Hopson has often said that when he recorded this music, in his imagination he was an alpine shepherd playing for his flock. “Echoes” is a glimpse into the soul of an Alphorn player.

The compact disc also features a studio recording of the Richard Strauss art song "Alphorn", for Baritone Voice, French Horn, and Piano. Strauss wrote the piece when he was sixteen years old for his father, who was a celebrated French Horn soloist with the Munich Opera. For this sentimental reason and for the beauty of the music, “Alphorn” was a favorite piece for Strauss throughout his long life.

MUSIC: Rocky Mountain Alphorns "Echoes" Compact Disc is an idealized image in sound of a shepherd boy playing his Alphorn on an Autumn evening as his flock settles in for the night. The sheep bells reinforce this image, as well as the feeling of vast open air created by the echoes,the chirping of the crickets, the occasional buzz of a dragon fly and the periodic release of rockfall from the heights above.

RECORDING LOCATION: Gargoyle Valley is a rugged three hour hike north and west of Banff, Alberta, in the heart of the Canadian Rocky Mountains. A deep valley surrounded by towering rock walls, it is a place of wild vertical beauty where light and sound reflect at steep angles from unexpected places.

HISTORICAL BACKGROUND: Many of the melodies represent a particular locality in Switzerland, and some describe a daily activity or signal a message. It was a favourite pastime for alpine herdsmen to exchange Alphorn melodies across the valleys from distant hilltop stations.

The "The Herdsmens' Song from Fribourg" is an ancient melody much revered in the French part of Switzerland. In difficult times, large families and rocky land meant that young men had to leave their homeland, often to fight as mercenaries in foreign armies. The sound of this melody was more than many of these young men could bear. Desertion was so common among homesick Swiss soldiers that this melody was banned on pain of death in medieval Strassbourg.

"High on the Mountain" is an Alphorn melody that Johannes Brahms heard while hiking in the Rigi area of Switzerland. The melody so inspired Brahms that he featured it in his "Symphony No. 1 in C Minor". Played early in the last movement by the French Horn player in the orchestra, the melody is surely one the greatest moments in music. The song of a shepherd's horn has carried far.

Song of the Fribourg Cowherds......Traditional

From the Riemenstald Village 1......R. Eichhorn

From the Riemenstald Village 2......R. Eichhorn


High on the Mountain......Traditional to the Rigi

[Following are excerpts from a Review by John Dressler in the February 1998 Edition of "The Horn Call", a Journal of the International Horn Society.]

Mr. Hopson has produced an intriguing album of fifteen alphorn calls based on authentic shepherd music played in a natural setting.....The alphorn has a hauntingly beautiful timbre; it can be mournful, it can be robust. But in every case, it rings true of the en dehors nature of its background. A wonderful discourse about the instrument along with photos of it is included in the liner notes.....

TO ORDER: Please send a cheque or money order made out to Rocky Mountain Alphorns to the following address:

OR PAY WITH PAYPAL: Send me an email telling me the details of your order, and I will send a PayPal Direct Pay invoice to your email address. PayPal is a secure online payment service that takes all credit cards and debit cards.

ARIOSO MUSIC: While you are ordering an Alphorn cd, why not order Alphorn music? You may combine an order for Rocky Mountain Alphorn CDs with an order for William Hopson's new edition of Alphorn music for the quantity discount. Check out this music at:
"Arioso - Eight Expressive Melodies for Solo Alphorn"